The impact of an image: creating a new visual language for migration 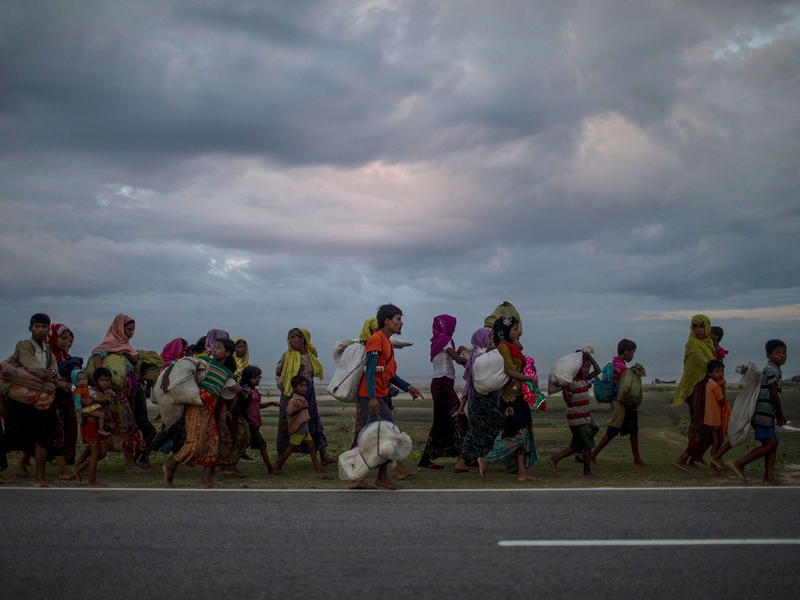 Try Googling “migration” and the images that come up are typically ones like these,
from National Geographic

As positive self-image is the pre-requisite for empowerment, how might we create a visually empowering self-image for newcomers, one from which they can actually develop economic agency?

The need for a new visual language

PLACE takes an economic approach to migration: it seeks to make visible the economic contribution of migrants, and their high potential for innovation, as people arriving with a fresh perspective on our systems.

So the project needed a new visual language to match this approach. In particular, it needed a visual language to set the stage for its numerous pop-up events across Europe, called labs, which enable migrants to set up enterprises and projects that are then integrated into the local economy.

My company Wow!Labs designed and created the pop-up physical environments for the labs to happen in different cities in Europe. We did not take the task lightly. We knew that the physical spaces needed to create a shared culture that was visually powerful. Only strong, new representations would move the omnipresent media images to the background of everybody’s minds.

As positive self-image is the pre-requisite for empowerment, how could we create a visually empowering self-image for newcomers, one from which they could actually develop economic agency?

And as the media creates an awkward encounter between refugees and host society and that interaction is key to integration, how could we design an equal playing field for empowering relationships to form between the public and refugees?

We wanted images that would impose themselves bluntly, to match the power of the images that imposed themselves through the media: we needed big formats, to be an obvious shared language between all people present in the labs.

The conditions for an empowering image to emerge

We came up with lots of ideas that didn’t work. There were significant constraints to the process.

“It takes a village to create an image”

The process of live painting which we came up with, and the resulting monochromatic portraits, were a result of the constraints described above. This is how we went about it. 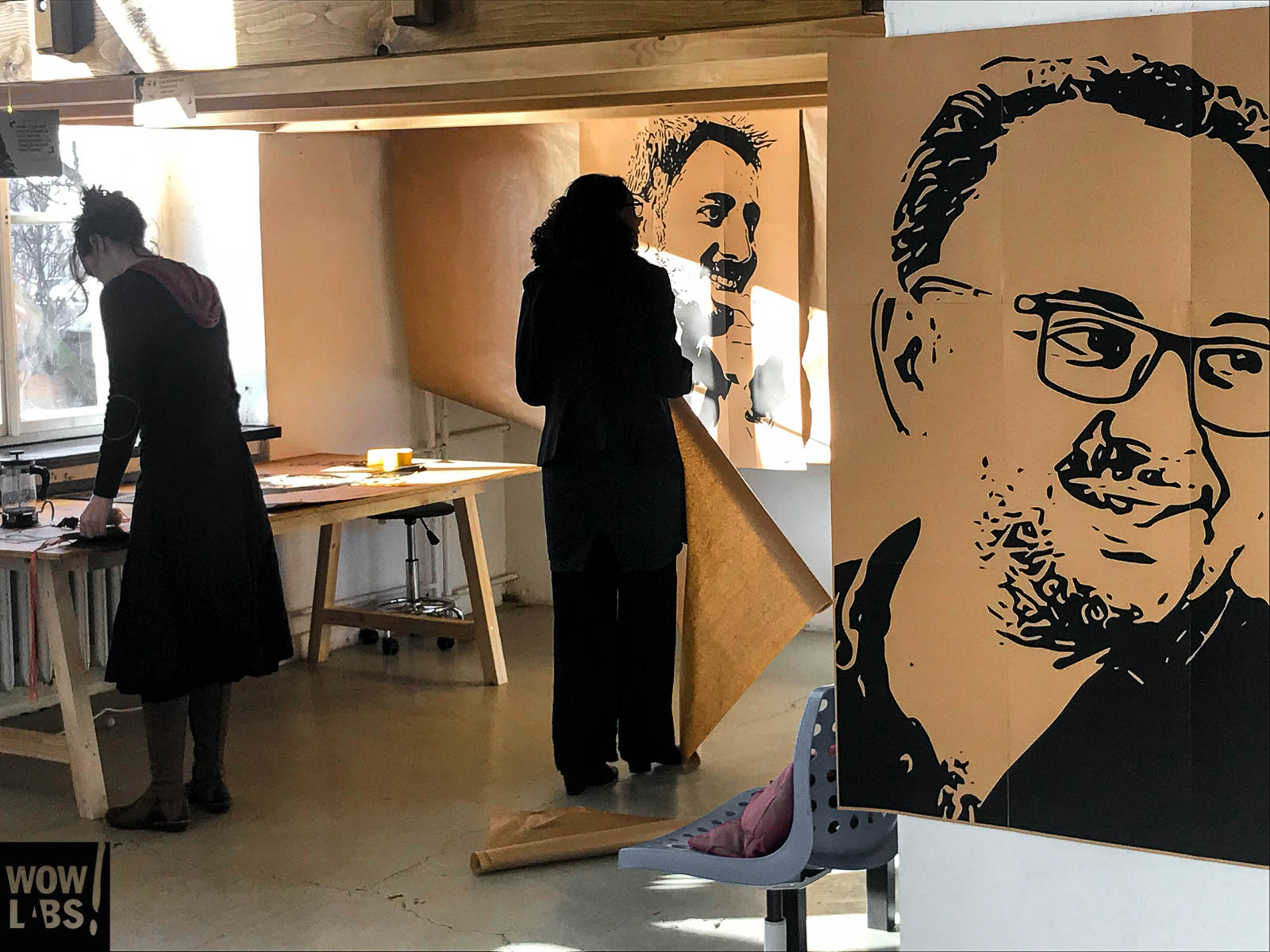 First, we discretely took photographic portraits of participants in full action in the labs. People were clearly fully themselves, thanks to the thriving informal culture the multicultural PLACE team had created since the sourcing process, which emphasized everybody’s strengths and created a strong sense of shared intimacy.

We then reworked these photos, still on site, vectorized them, and then projected them onto a blank canvas – the same kind of butcher paper that the participants worked on, to emphasize both the work-in-progress and urban feel, which provided more room for error.

Then, the Wow!Labs team live-painted the portraits. The actual act of painting was staged so as to dedramatize the creation of the visual representation of the people in the room: loud uplifting music set a playful stage, and the painting stations was set in a 2X1 meter wooden frame, identical to those used by the teams of migrants working on their projects. These frames separated the wide spaces we occupied, offering the teams creative space to build their projects in. With a frame dedicated to live painting, we were like any of the participants, trying to make something work in a limited time and space. 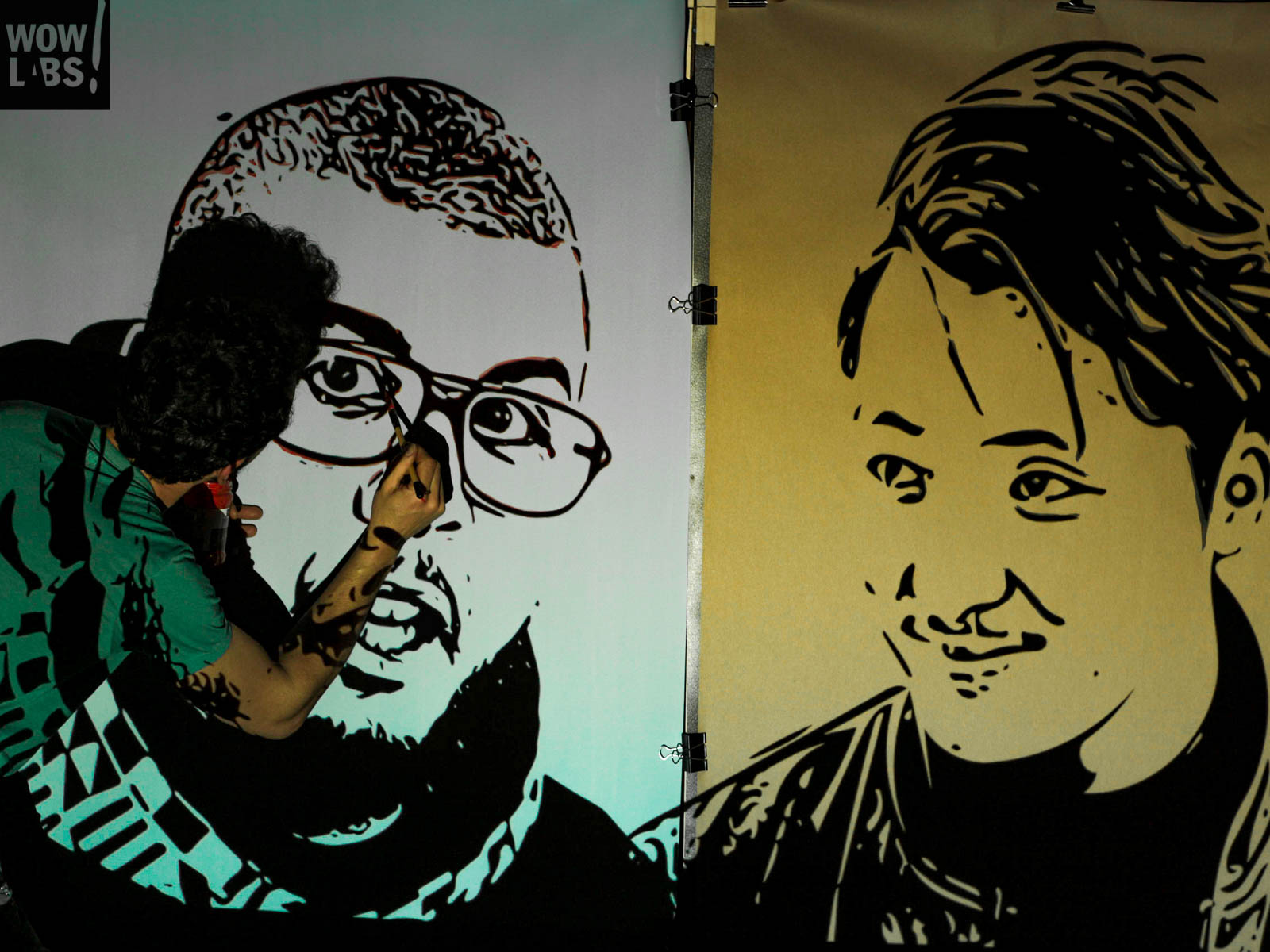 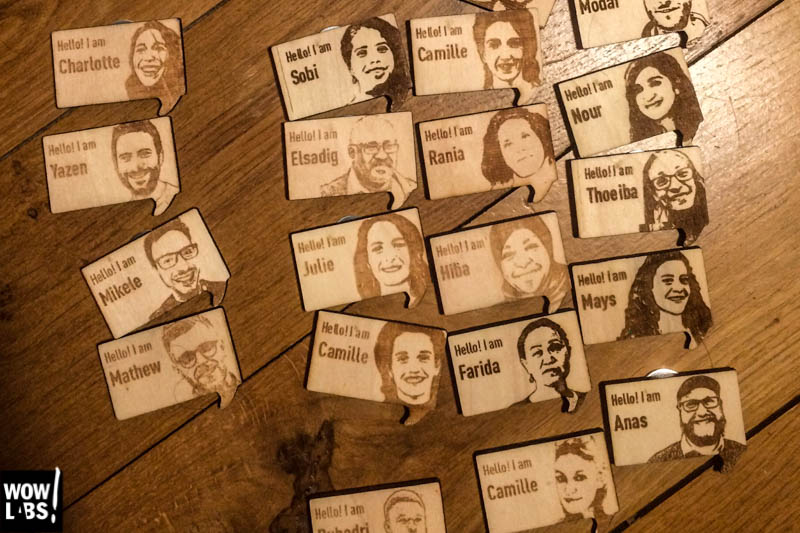 The process was dynamic: people coming up to where live-painting was happening and reacting to the different portraits being born gave us indications of what spoke to people and what didn’t.

The process was dynamic: people coming up to where live-painting was happening and reacting to the different portraits being born gave us indications of what spoke to people and what didn’t. The excitement or indifference we observed on different aspects or styles were potent indicators of how well we were doing and how we needed to adjust.

These frames also offered the advantage of holding the portraits up, imposing an alternative visual reading of the group of people in the space, a relatable, vertical “translation” of the very people that were in the room.

Crafting solutions where the thick of the problem is

We live painted about 50 portraits over 4 years. 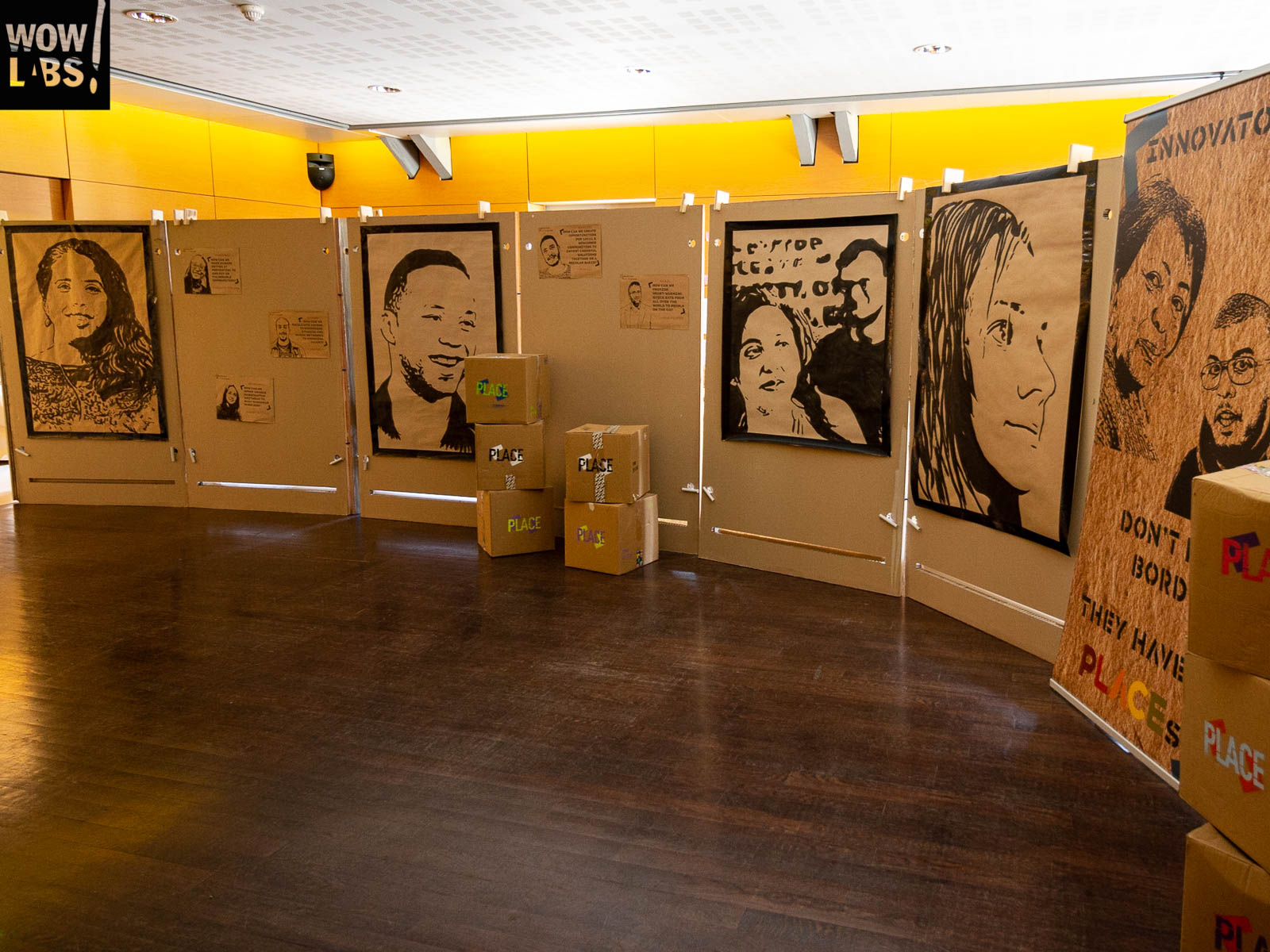 They did the trick: they were adopted and then requested both by newcomers, partners and the wider ecosystem. Some ended up commissioned by institutional partners, others were turned into cushions, postcards and human-sized 3D-cut-outs, and present in dozens of venues all over Europe, travelling beyond Paris to Berlin, London and Munich to create a recognizable visual culture for the innovation carried by refugees and migrants.

The original portraits were rolled up and unrolled so many times that we had to find increasingly ingenious ways of keeping them flat on the walls as a context for the nomadic pop-up labs. To some extent, the portraits became PLACE. 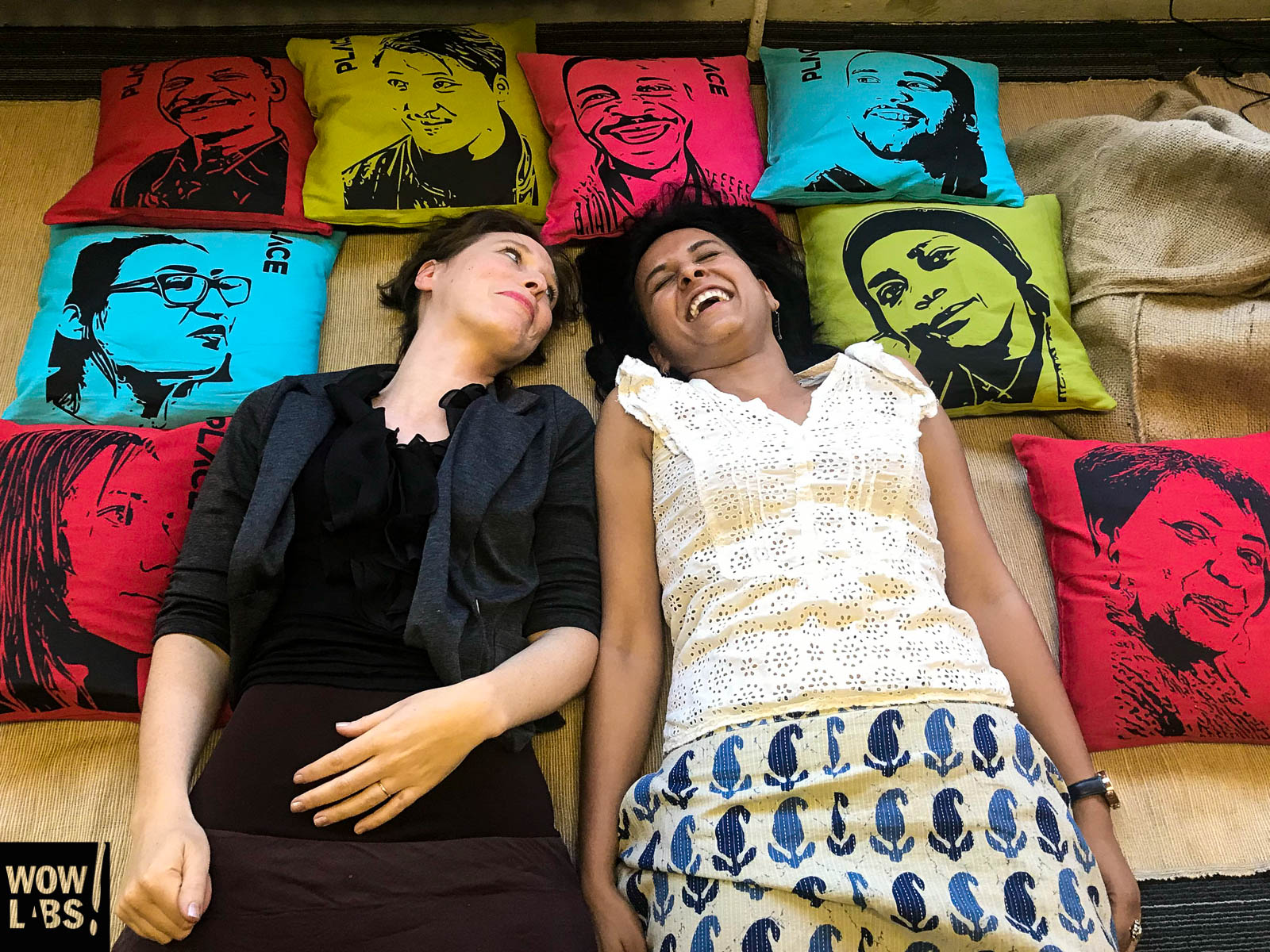 … you can’t really go wrong as long as you build question marks and ample room for feedback in whatever you create, and create in situ, where the thick of the problem is.

Because these visual representations were so loved by participants, we laser-etched wooden name tags with their portraits on them, so this new visual language became wearable. We even created one for the Mayor of Paris and heads of institutions hosting the labs, to astounding personal appreciation. We received warm personal messages of gratitude from all kinds of stakeholders: proof that we reached our aim in terms of creating a language that was a source of joy, far from the emotions communicated by the media.

What’s the takeaway for us? That co-creating the process of building new identities is less risky than doing it on behalf of other people, or alone. That you can’t really go wrong as long as you build question marks and ample room for feedback in whatever you create, and create in situ, where the thick of the problem is. And that humour, the quest for beauty and – dare I say it- yes, joy, is a common guide to all of us building our own identities.

Charlotte Hochman and Michele Caleffi are Co-founders & Directors of Wow!Labs, an innovation studio that creates results for companies, cities and universities by developing human capacity and physical spaces for innovation.

They co-founded PLACE, a European project that designs and runs pilot projects in Paris, Berlin and London to trigger and accelerate the contribution of refugees and migrants to local economies.